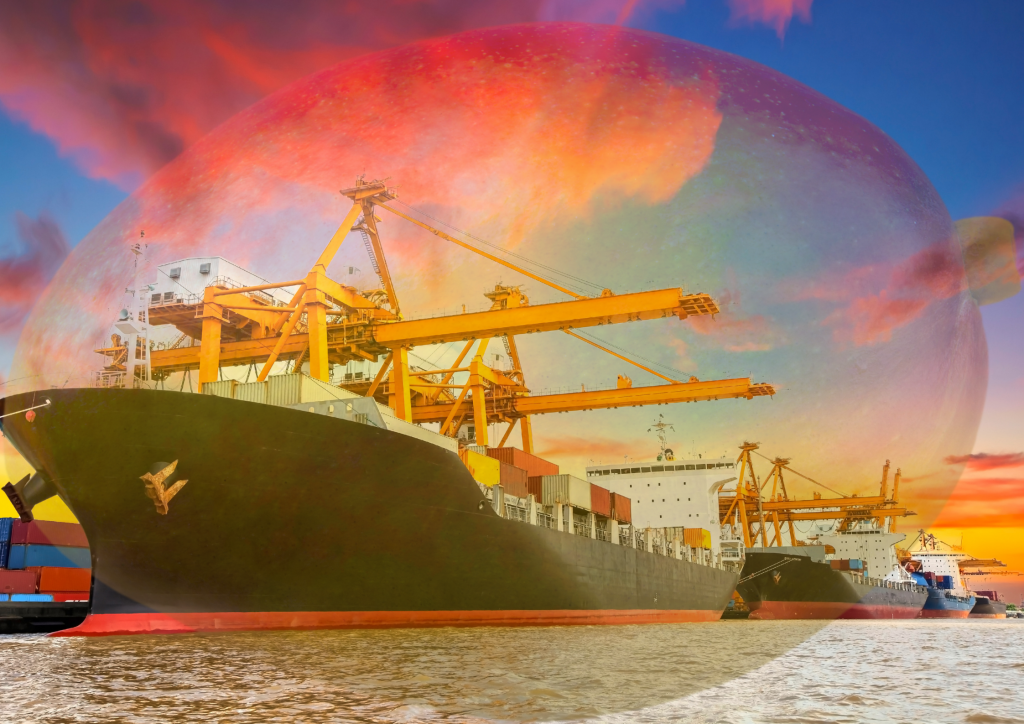 Overview of ports congestion in U.S. market, complemented by charts from Agronometrics. Original published on January 03, 2022.

Niche ports became havens in 2021 for some container shippers that couldn’t afford delays getting goods to market.

The Los Angeles-Long Beach port complex was the poster child for supply chain gridlock in 2021, with dozens of vessels scattered for miles off the coast waiting for a berth and piles of containers bringing landside cargo flow to a crawl. Vessels are taking five days or more to unload, and importers and exporters are experiencing extensive delays to secure containers and the chassis to transport them.

Some cargo owners and freight forwarders are bypassing the port congestion in major gateways by chartering small vessels, or using other tactics, to move containers to small ports that traditionally handle breakbulk, bulk and roll-on/roll-off cargoes. (Breakbulk shipments, such as rolls of steel or wind turbine components, are too large to fit into standard shipping boxes and are individually loaded and secured on the vessel.)

Here are five niche ports that became relief valves for container shipping in the past year:

Container volumes are at an all-time high, with imports more than double and exports up 135% for the first three quarters of the year versus 2020. In the past 12 months, exports are up 88% to $988 million and imports grew 25% to $8 billion, according to U.S. Census Bureau data.

Hueneme is located an hour’s drive north of the crowded Port of Los Angeles, the largest container port in the nation. Its core businesses are refrigerated imports, such as melons, mangoes and bananas — delivered by Chiquita, Del Monte and regional container line Sealand — and automobiles. 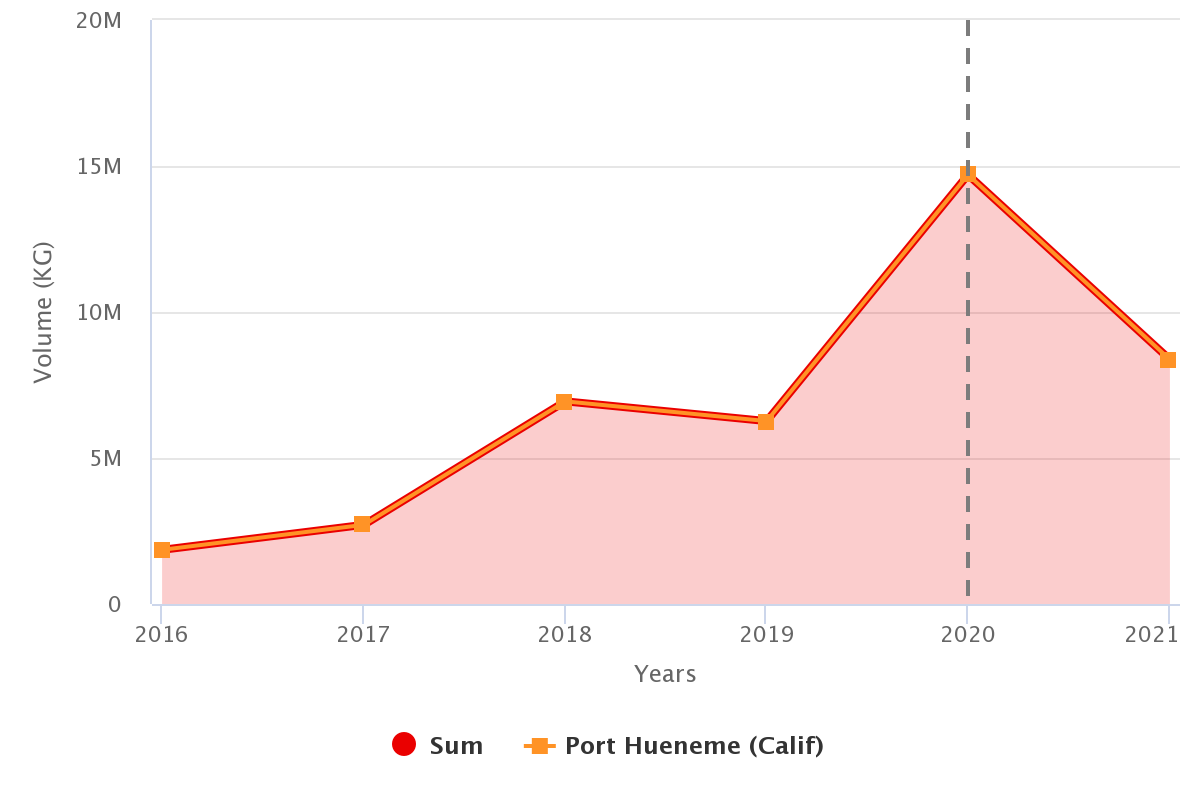 The port authority recently activated a joint use agreement with Navy Base Ventura County to handle some commercial vessels at its terminal within the port. Increased arrivals of small charter ships, transshipment of Asia cargo through Central America and general cargo ride-alongs on the Chiquita and Del Monte fleet have boosted Hueneme’s container traffic this year.

(Click here for a detailed view of how the Port of Hueneme is dealing with the new influx of container business.)

The Port of San Diego, about 90 minutes south of Los Angeles-Long Beach by car, has also been accepting additional vessels since March. It specializes in refrigerated cargo like fruit from Dole, which brings in 3 billion bananas a year, as well as automobiles, machinery, soda ash and project cargo like wind blades and lumber. San Diego also helps support military deployments when necessary.

Based on its size, capacity and available labor, it can take about two to four cargo vessels a month with various commodity types. Officials are working to make sure any spot container cargo doesn’t interfere with or slow down operations for existing customers, spokeswoman Marguerite Elicone said in an email.

Recent shipments include lithium batteries for solar and wind farms that came in 40-foot containers and juice concentrate in drums delivered by a refrigerated breakbulk ship. The concentrate for kids’ juice packs normally comes inside refrigerated container units.

Several shipping lines stopped calling Portland, Oregon, in 2017 when productivity declined at a terminal operated by a Philippines-based company because of work slowdowns by disgruntled longshoremen. The port has always had difficulty attracting container lines because of the 100 extra miles vessels have to travel up the Columbia River and its export-dominated cargo flows.

SM Line has added two additional vessels per month. Earlier this year it began a new intermodal rail service to move import loads to Chicago via the Union Pacific railway and four months ago it began bringing in additional loader vessels to handle local export cargo, for a total of six port calls per month.

In mid-September, Mediterranean Shipping Co., the largest container line in the world, began weekly trans-Pacific service to Portland — only the second time in nearly 15 years the port has more than one weekly service from Asia. MSC recently announced a revised rotation for its Mustang service, which will begin calling Portland early this month. Portland is the first stop on the express service — Los Angeles, Shanghai and Busan, South Korea are the others — and most of the cargo will likely be unloaded there, which is an appealing feature for shippers interested in getting hold of their shipments sooner.

In mid-August, three large importers began bringing their goods to Portland’s Terminal 6 every three weeks on charter vessels with capacity for 600 containers, according to the port’s website. The vessel rentals were temporary to help the companies stock up in time for the holiday shopping season.

Seko Logistics has chartered similar-size vessels from brokers for the first time and is moving cargo for its customers through Portland and other secondary ports, Chief Growth Officer Brian Bourke said on the Dec. 1 edition of the FreightWaves show What the Truck?!?

Similarly, eight vessels carrying 53-foot domestic containers — rather than the standard 20-foot or 40-foot size — started calling the port in August and will continue making deliveries through 2022. Each vessel will offload 200 to 300 containers. The larger containers are used for intermodal shipments within North America. They are made in China and, as previously reported, some big box stores are loading them with merchandise for a one-way haul to take advantage of the capacity under tight market conditions.

The port authority initiated the Cleveland-Europe Express service in 2014 with one multipurpose vessel moving back and forth between Antwerp and Cleveland and later added a second vessel. A second multipurpose ship that moves a variety of goods, including containers, was subsequently added, enabling twice-monthly service. Growing volumes led the agency this year to add a container-only vessel to the service. The Peyton Lynn C has capacity for 860 twenty-foot equivalent units. Dutch carrier Spliethoff operates the vessel, which also makes an intermediate stop in Picton, Ontario. Officials say they hope to add a fourth vessel to the rotation, in partnership with Spliethoff, and offer weekly service in 2022.

Montreal is much bigger than the other ports on this list, handling about 1.6 million TEUs annually. But in late November the Port of Montreal for the first time welcomed a container vessel directly from China, without cargo transshipment in the Mediterranean. The vessel was chartered by freight forwarder Fracht FWO, according to the port authority’s website. The direct call is another example of how the logistics industry is trying to bypass holdups in the supply chain and increase efficiency.