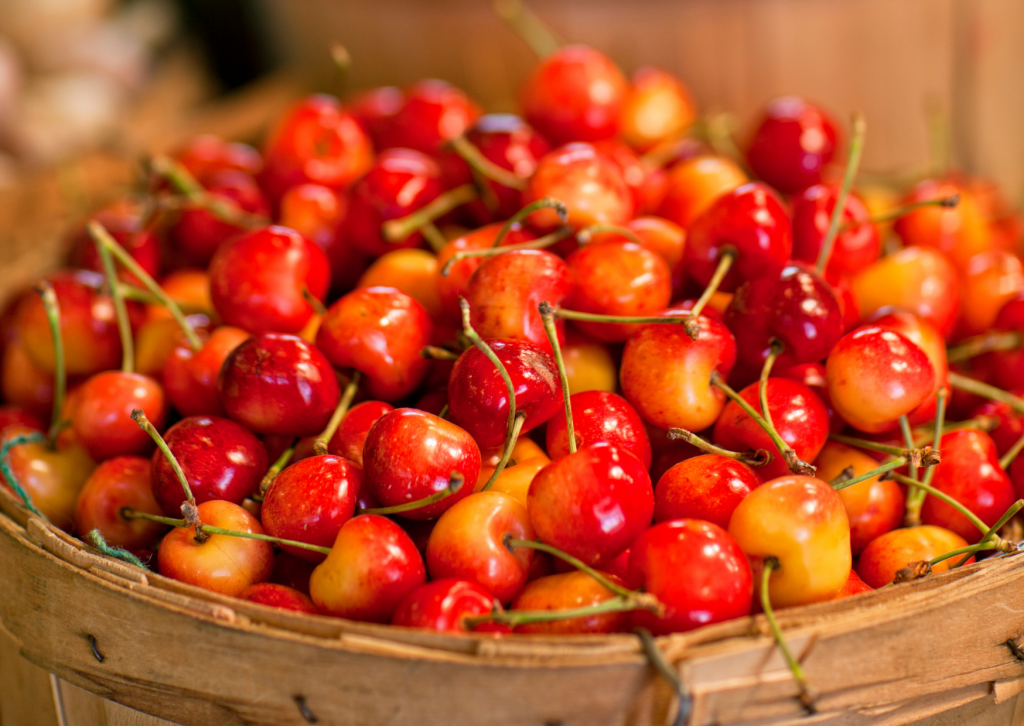 In this installment of the ‘Agronometrics In Charts’ series, Sarah Ilyas studies the state of the Washington cherry market. Each week the series looks at a different horticultural commodity, focusing on a specific origin or topic visualizing the market factors that are driving change.

The United States is the second-largest producer of cherries in the world after Turkey (FAOSTAT 2019). According to the Pacific Northwest Horticultural Council, the percentage by Volume of U.S. Crop (Fresh Consumption) Produced by the Pacific Northwest in 2021 was 69%. Additionally, 20,342,214 20 lb Boxes were produced in this region. The cultivar “Bing” has been one of the most prominent sweet cherry varieties grown in the region, representing around 50 percent of the production in Washington. Recently, however, growers have been more inclined towards varieties that lead to higher yields and are more rain resistant. Generally, the Washington cherry season begins in the last few days of May or early days in June and goes until August 20-25th. “We’re in the bloom season right now and so far, it’s a trying time, we’ve had a lot of freezing temperatures and a host of cold weather issues. Hopefully we’re coming out of that weather and we’ll see where we stand over the next couple of weeks.” says Dan Davis with Starr Ranch Growers based in Wenatchee, Washington. Peak volumes in 2021 were recorded at around 29K tonnes, in week 25. Owing to the sub zero temperatures recorded in the winter, volumes this season are expected to be lower. 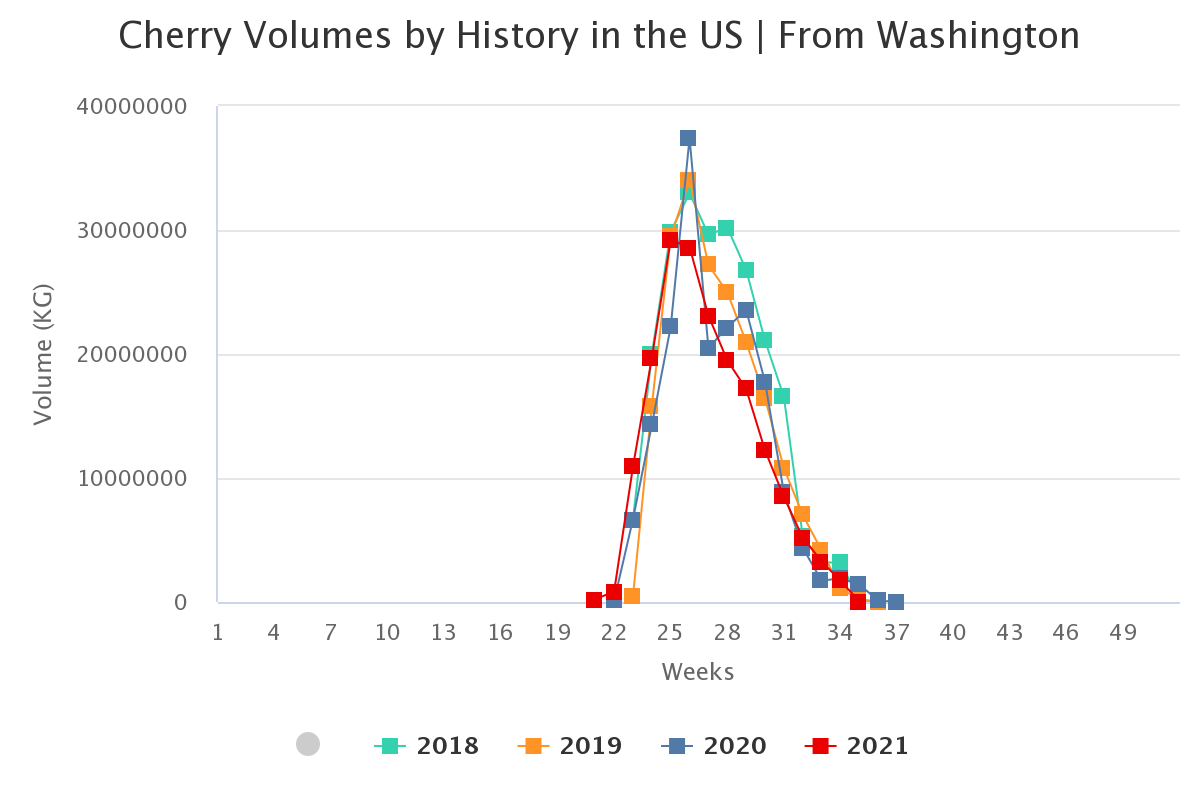 Oregon and Idaho will roughly have the same production window as Washington this season, as for California, “Last year we had significant overlap with California but this year it’s looking like they’ll conclude the bulk of their crop and be out of the market in advance of us coming into production,” says Davis. Prices for cherries during the beginning of the year ranged from $36.29 to $32.60. With lower expected yields, prices are likely to leap this season. 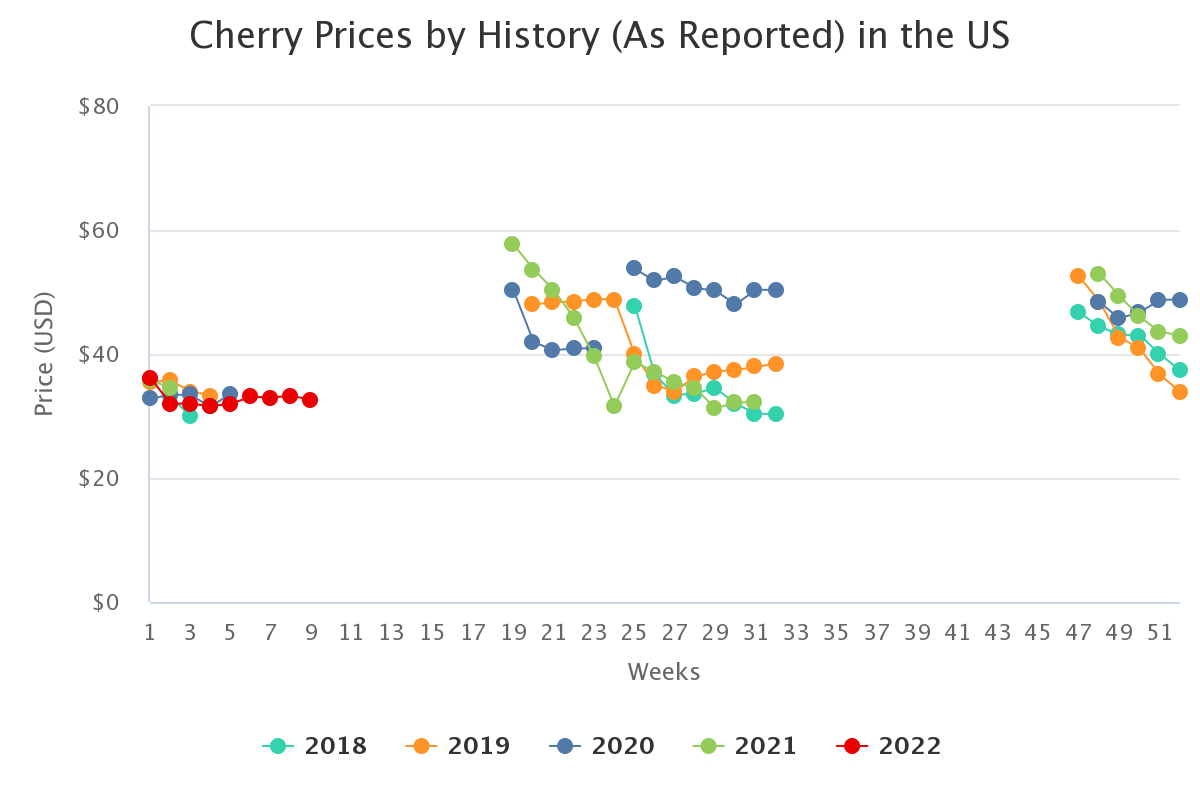 Extensive plantings of nouveau, improved selections have been made recently. Some traits that are sought after by breeders are early ripening, larger size, firmness, self-fertility, rain cracking resistance and stem-free characteristics. Most of the newer varieties grown in the Pacific Northwest were produced or selected by the Washington State University-IAREC Sweet Cherry Breeding Program in Prosser and the Pacific Agri-Food Research Centre (PARC) in Summerland, B.C., Canada. Additional sweet cherry varieties and/or rootstock trials are carried out at WSU’s Western Washington Maritime Research and Extension Center in Mt. Vernon, WA.

In our ‘In Charts’ series, we work to tell some of the stories that are moving the industry. Feel free to take a look at the other articles by clicking here.
All pricing for domestic US produce represents the spot market at Shipping Point (i.e. packing house/climate controlled warehouse, etc.). For imported fruit, the pricing data represents the spot market at Port of Entry.