Overview of stone fruit from California in the U.S. market, complemented by charts from Agronometrics. Original published on April 07, 2022.

The California Fresh Fruit Association President Ian LeMay recently penned an op-ed highlighting the impacts of inflation on the state’s agriculture and specifically, stone fruit industry, according to a press release.

In the article, LeMay points out several staggering statistics. For one, growers have dealt with the implementation of increased wages that now lead the nation at $15 per hour. Another change growers face is a new standardized 40-hour work week for agricultural employees, noting that in 2018 the standard work week was 60 hours.

The California stone fruit industry has faced an average of 15% rise in costs each year for the last three years, resulting in a 45% rise in overall costs, the release said. Shipping costs have increased by 100% over the last two years, cost of pallets up 50%, packaging up 20% and sea freight up 50%.

In order for the industry to remain viable, changes need to be made at the retail level. Increases have resulted in the overall production cost per box to increase $7.55 since 2019. This is equivalent to $.42 per pound. Unfortunately, retail pricing, LeMay notes, has not increased at the same pace. Since 2019, retail pricing has only seen an increase of $2.88 per box or $.16 per pound, according to the release.

“As a united stone fruit industry who relies on agriculture, the time is now to understand that farming is in jeopardy and the time is now to build a plan of financial sustainability and longevity,” Ian LeMay president at California Fresh Fruit Association, said in the release. This is our S.O.S. to those who have long valued our industry. To all of our partners in the retail space, we need your support to ensure that fresh California peaches, nectarines and plums have a place on kitchen tables.”

California is proud to be known as the stone fruit state. The industry is continually making huge investments in cultural production and administration practices to find new efficiencies to drive down costs in our operations without affecting quality and safety.

Stone fruit from California in the US market | Historical volumes (Kg) 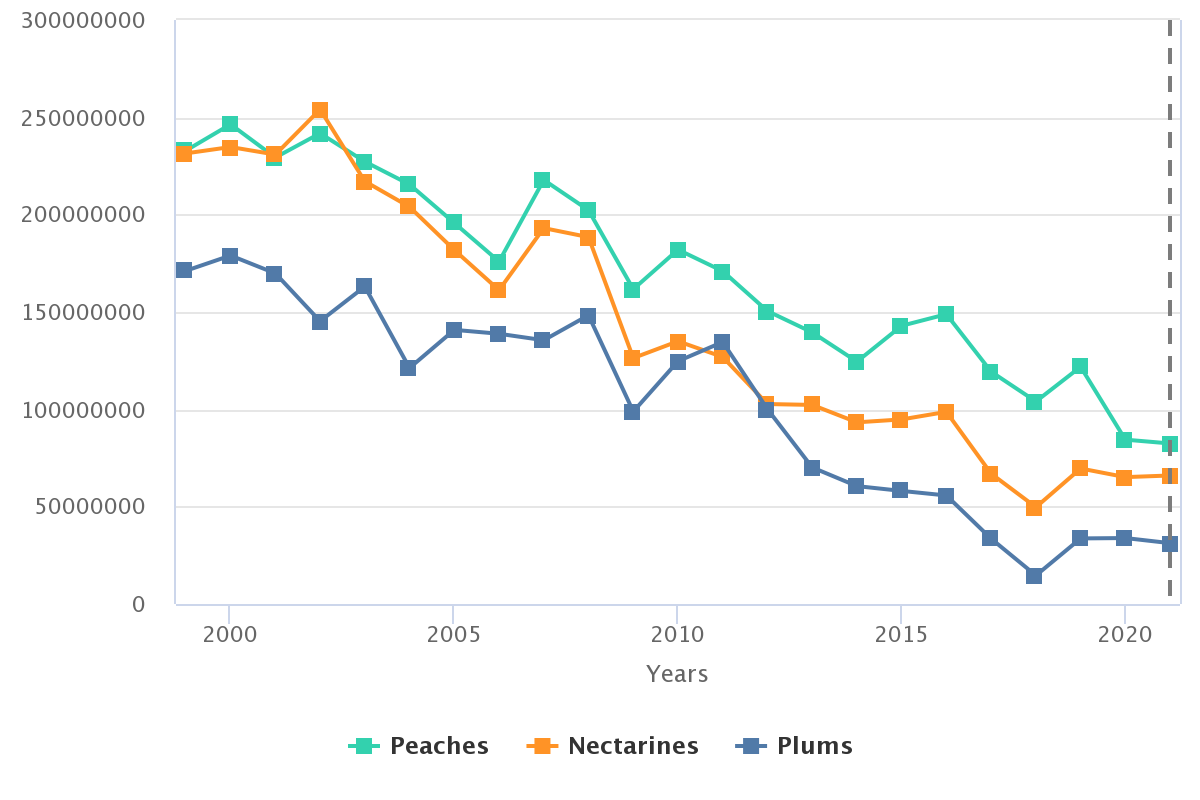