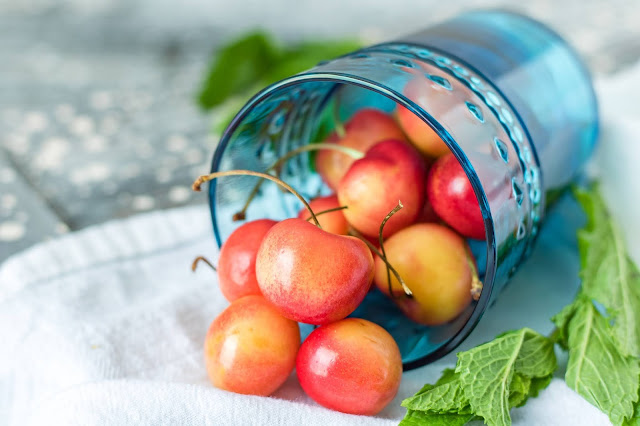 Overview of the Chilean summer fruit exports to the US, complemented by charts from Agronometrics. Original published on November 18, 2020.

As the pandemic trudges into winter, a taste of summer from Chile may be just what the doctor ordered. Fresh cherries, grapes, blueberries, stone fruit and more are on their way to the U.S. via air and boat, offering plenty of promotion opportunities over the next six months.

“Retailers were eager to call out vitamin C and other health messages during our summer and fall citrus promotions,” said Karen Brux, managing director for North America of the Chilean Fresh Fruit Association. “As COVID-19 continues and we enter flu season, I expect they’ll continue to focus on health benefits.”

Brux said February is the key month for promotions as volumes will be at their peak. “In December we have small volumes of cherries, blueberries and grapes, while January brings larger volumes of blueberries. February is the key promotion month for blueberries, peaches and nectarines, as the cherry season comes to a close. We run some grape promotions – our biggest category – in February, but March and April are definitely bigger months for grapes.” 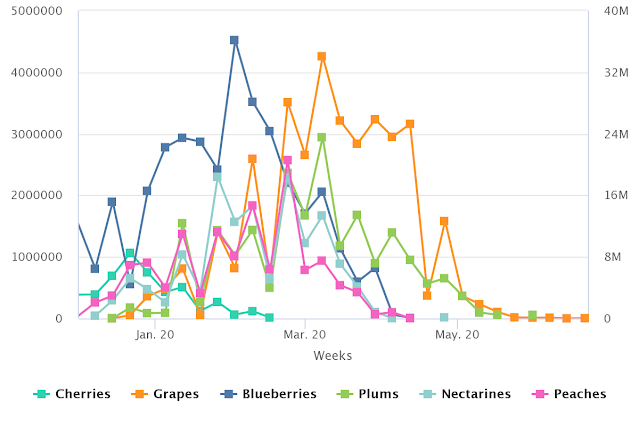 Josh Leichter, general manager at Los Angeles-based Pacific Trellis Fruit/Dulcinea Farms, said the season looks promising so far. “The good news is that Chile had a good amount of winter rain and snowpack in the mountains, so most growers aren’t facing the water issues they experienced this time last year. It’s been a good spring for fruit production and everyone’s optimistic about the size and quality of the crop.”

He said new varieties of grapes, and more recently stone fruit, combined with advances in post-harvesting handling and logistics, have added to the overall quality and consistency of the fruit.

With people cooking at home more and planning more meals in advance, Brux said now is the time to inspire with convenient, healthy and tasty ideas. “Our Fruits from Chile website offers recipes and usage ideas for everything from Blueberry Power Balls to Roasted Cauliflower with Chilean Grapes and Peach Pie Smoothie Bowls.”

Winter holidays and occasions such as Heart Health month in February offer even more promotion opportunities, Brux said. Fruits from Chile sends holiday or occasion-themed promotions to its more than 500,000 Facebook fans and 35,000 Instagram followers, and it distributes a consumer newsletter to more than 25,000 subscribers.

The association is also reviewing a number of e-commerce options to drive online sales of Chilean fruit.

John Pandol, special projects director for Pandol Brothers Inc., Delano, Calif., notes that Christmas and New Year each fall on a Friday, which will encourage shoppers to stock up for long weekends at home. He predicts blueberry ads will feature larger clamshells than in the past.

“The second week of February we will be pushing both grapes and blueberries,” Pandol said, noting consumers buy fresh fruit for Valentine’s Day menus. Mardi Gras, even college bowl games, may also be celebrated in-house this winter.

An early Easter, which falls in the first week of April, should help also. “The earlier Easter falls, the stronger grape sales are,” Pandol said.

Pandol said one of the industry’s biggest challenges is how to adopt merchandising to the virtual world. “Grapes are an impulse item. People buy more when the grapes look good, and many taste a grape or two before buying. What happens when a customer does a search for grapes or blueberries and the same image comes up week after week, month after month? How will we introduce new varieties, especially those with unique flavor characteristics, without in-store sampling?

“Every produce manager needs to check the online version of his department the same way he walks the store and checks the displays,” Pandol said. “The online shopper who only sees a mediocre online catalog won’t buy, losing customers and sales.”

He said the training of online order fulfilment personnel, whether employees or third-party gig workers, is crucial.

While Leichter expected to see more demand for packaged fruit this season, he said customers who trialed additional packaging on certain items in the offseason found their shoppers still wanted to be able to see and touch the product. In addition, as misconceptions about COVID being spread by fruits and vegetables have been dispelled, he said the desire or need for additional packaging seems to have faded.

Here’s a closer look at some of the most popular winter fruits from Chile.

Brux expects peak cherry shipments to the US in weeks 51/52 a
nd said cherries provide great holiday promotion opportunities from November through January.

Bengard Marketing, Rancho Dominguez, Calif., starts its Chilean season in early November with air cherries. Sales manager Stephen Pearson anticipates the pandemic may cause delays and increase air costs due to lack of flights. Promotions for cherries arriving by vessel should peak in early to mid-January, Pearson said.

Volume (in KG) of cherries from Chile in the US market 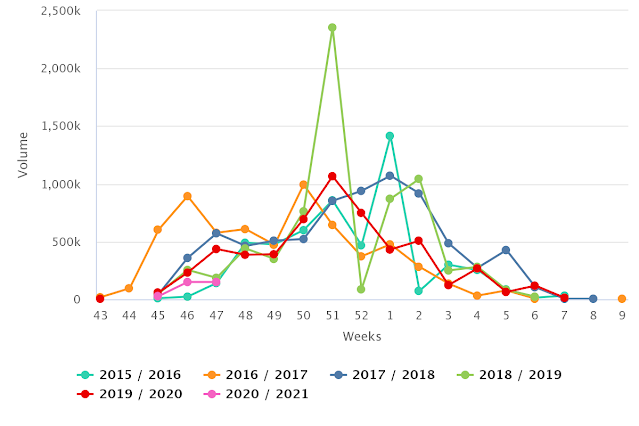 Chilean blueberries are available November through March, said Brux, with peak shipments to the US expected in weeks 2/3.

“The blueberry season is about a week behind last year’s season, but we anticipate the same volume, if not a little more,” said Brian Bocock, vice president of product management for Naturipe Farms, Salinas, Calif.

Naturipe has shifted its Chilean production toward organic. “Our acres of proprietary varieties are a bit firmer with more appealing flavor profiles than conventional,” Bocock said. “As they mature and produce more berries, these varieties will make up a higher percentage of our pack.”

The pint remains Naturipe’s most popular pack followed closely by the 18-ounce pack, he said. Blueberries also feature in the grower-shipper’s newest snack line, Bliss Bentos, which combine fresh blueberries or grapes with unique ingredients including chocolate-covered chickpeas for an indulgent hit of protein.

Volume (in KG) of blueberries from Chile in the US market 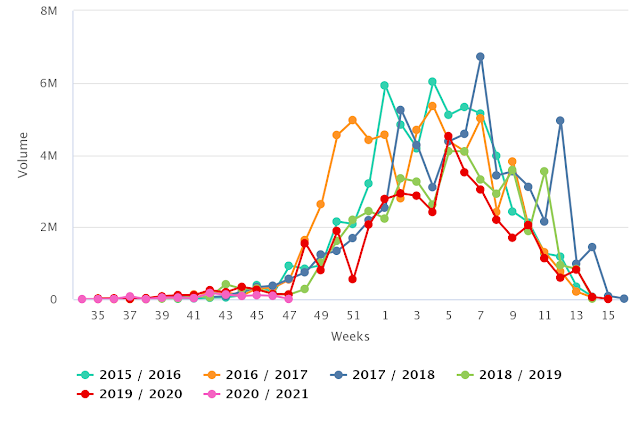 Brux expects nectarine and peach shipments to the U.S. to peak in weeks 4/5, with some early fruit flown in. Plums peak in weeks 7/8, the height of the Chilean stone fruit season.

“Some specialty varieties, such as lemon plums, present unique promotion opportunities as they’re only available for a few weeks,” she said.

Chile’s grape season by vessel starts in mid-November, with overall volume to the U.S. expected to be about the same as last year. “Newer grape varieties will be coming in heavier volumes this season, as production plantings have increased over the past three or four years,” Pearson said.

Brux expects peak grape shipment to the US in weeks 12/13.

Leichter’s current favorites include green Sweet Globe, red Allison and black Iniagrape-One (a.k.a. Inia One), developed in Chile. “These new varieties bring excitement to the market not only for their quality and condition but also for their eating experience, which will ultimately lead to more sales and business for everyone.”

Volume (in KG) of grapes from Chile in the US market 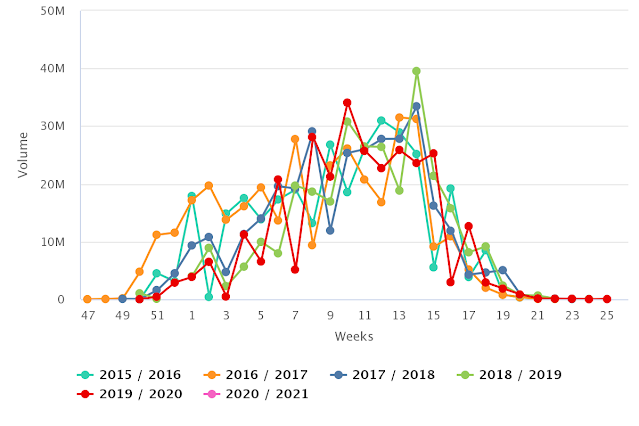