Overview of citrus crop in the U.S. market, complemented by charts from Agronometrics. Original published on January 26, 2022.

California’s citrus groves look remarkably different than they did last year, when a record crop weighed down mandarin trees and navel oranges stayed on trees late into the summer months due to shipping issues at congested ports.

This season, both mandarin and navel harvests are predicted to be much lighter and shorter in length due to drought, water and cost issues affecting this year’s crops.

On the bright side, a steady, manageable supply of fresh citrus is ready for consumers wanting healthy, vitamin C-packed fruit. Yet several weeks into the season, the marketing committee for the California Citrus Mutual trade association predicted the navel crop will be down 20%, and the mandarin crop will drop as much as 45% from the 2020-21 season.

“There were a lot of (navel) growers who still had fruit on the tree at the end of the year,” said Citrus Mutual President Casey Creamer. “When your fruit is not picked at all, the following year’s crop is down significantly.”

According to the California Department of Food and Agriculture’s Navel Orange Objective Measurement Report, 4% of last season’s crop was not picked or sold.

Shippers extended the market well into August in an effort to sell as much of the crop as possible. But whenever there is a heavier crop, Creamer said, it is naturally followed by a lighter crop.

Sun Pacific navel and Cara Cara field manager Gus Carranza said, “We’re going to have the opposite of last year. It is definitely a shorter crop this year, and what we’re seeing from the field is that it will continue to be a shorter season.” 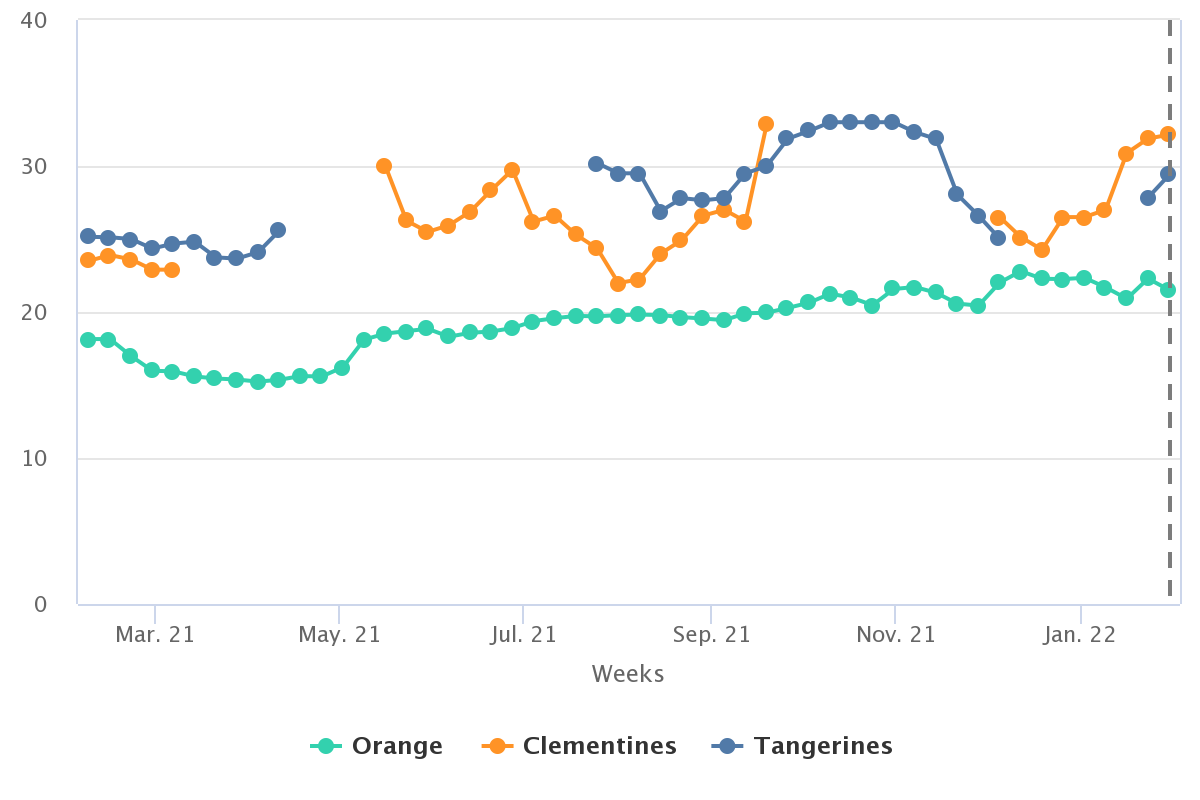 The same holds true for the mandarin crop. Clementine, Tango and W. Murcott mandarin trees—which produce the kid-approved citrus marketed under names such as Cuties and Halos—set an enormous crop, which is one of the contributing factors to the light crop for 2021.

According to this report, the lower fruit set is due to significant pruning and fruit drop in many of the sampled orchards. Several days of record summer heat caused many trees to drop what little fruit was forming.

Grower Mark Lambert of Exeter is experiencing the impacts.

“In general, I am down at least 50% in my Tangos,” he said. “It hurts, but that’s farming.” Lambert also cited excessive summer heat and wildfire smoke as likely stressing his orchards.

Lambert said he will modify his farming practices slightly, namely pruning trees harder every year so production evens out year to year.

Other significant factors are impacting California citrus growers. Creamer said they continue to face increasing costs of bringing a crop to market—complicated by the pandemic and drought.

“One thing I am constantly stressing is production costs,” he said, citing significant increases in water, labor, fertilizer, crop protection and transportation costs. “We can’t continue doing this if there’s no profit margin, and ultimately, consumers will decide if increases are bearable in the market.”

An internal industry survey of California citrus growers conducted by Citrus Mutual in 2021 found that, on average, farming costs for the 2020-21 season increased by nearly $1,000 per acre. This represents a 19% increase since the start of the pandemic.

Amid historic drought conditions in 2021, Citrus Mutual reported, the spot market for surface water increased 400%—if supplies could be found at all. In August, the State Water Resources Control Board cut off water deliveries from the Sacramento-San Joaquin Delta to thousands of Central Valley farmers.

Read related: How to solve the California’s water crisis

“During that 10-day period (in December), it forced everyone to clean out their inventory,” he said. “Nobody could pick, and that’s really important, because it puts a fresh, high-quality piece of fruit back on the market once you come back online.

“Demand settled in right after the New Year, and the prices are going up, especially on small fruit,” he continued. “You’re marrying good demand with good quality, and that is a recipe for success. Rarely do fruit quality and demand go stride for stride.”

Wileman said he anticipates the season will peak six weeks earlier than usual due to the smaller crop.

“Even though it’s a lighter crop, we’re not any slower, in general. We are in a good position, the best position we’ve been at in January in some time,” he said.

As harvest continues, shippers will need to continue showing discipline to ensure that retailers do not run out of fruit.

Citrus Mutual’s Creamer estimates that the current navel crop will go through May and mandarins through June, with consumers banking on sweet fruit due to high sugar content.

“Consumers will have a similar amount of fruit available to them this year with outstanding eating quality, and that’s a good thing,” he said. “California oranges most likely won’t be in the supermarket as long.”