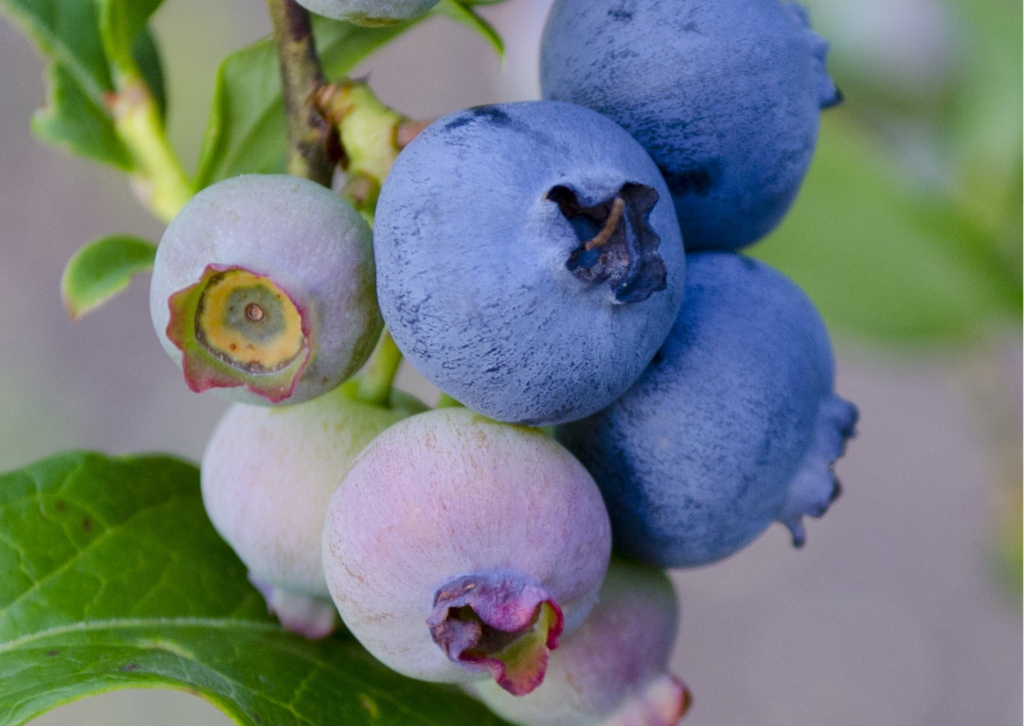 Overview of blueberries in the U.S. market, complemented by charts from Agronometrics. Original published on June 9, 2022.

Co-presidents Steven Espinosa and Albert Grimaldi are leading the charge at Fru-Veg Marketing.

Three seasons ago, the company partnered with Berry Bros. allowing Fru-Veg to expand its blueberry program to include domestic blueberries to customers from farm-to-table and also create a 12-month, year-round supply of fresh blueberries. Now the two companies have started a bigger project together. 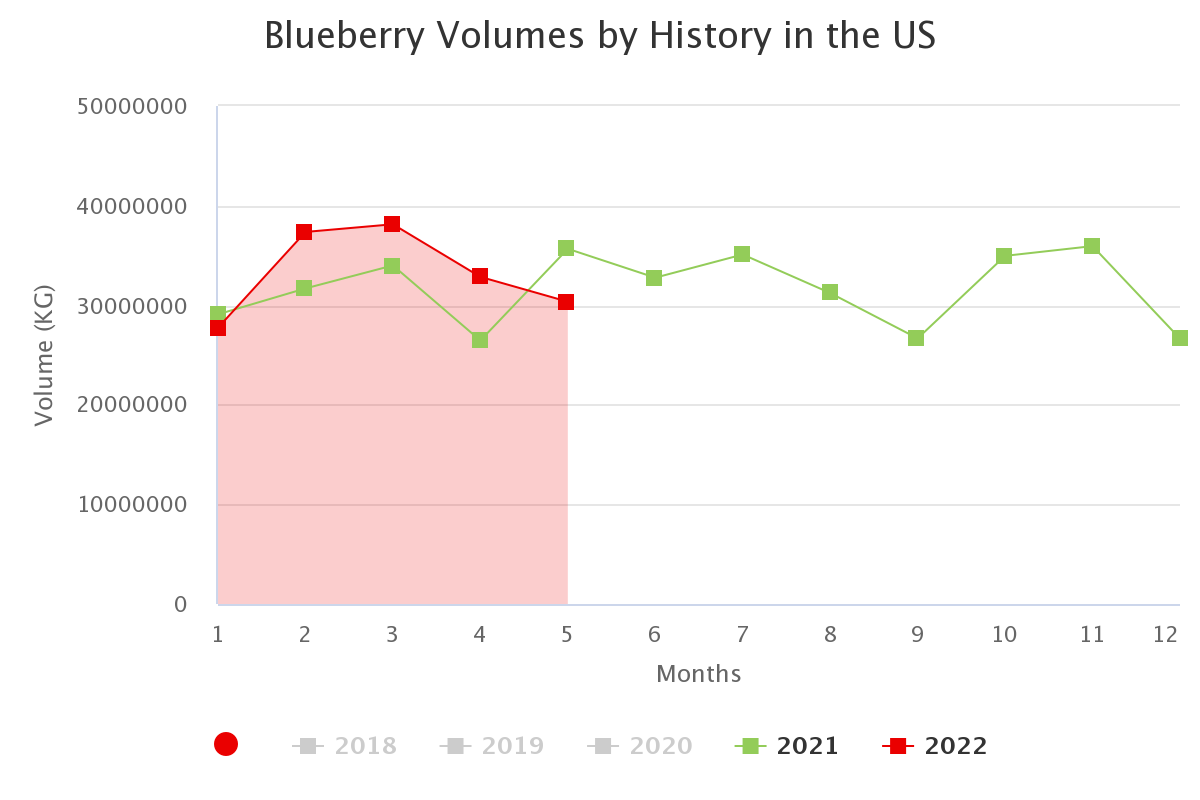 “We got together as business partners and created a company called NuBerry Farms, which is exclusive to focusing on berries, specifically blueberries, which is going to help us be a vertically integrated berry company with year-round production,” Grimaldi said. “We have conventional and organic blueberries, as well as a blackberry farm in Georgia, and we’re maintaining our own entity as Fru-Veg, though this is a brand-new marketing company whose goal is all about berries.”

NuBerry Farms will have its own label and ultimately be a company that can compete with the large berry companies in the industry. “Fru-Veg has been in the blueberry import business for 20-plus years and the Walker family, the growing entity of Berry Bros., has been farming blueberries for several years, and they made a business decision to market their own crop,” Grimaldi said. “As we developed a relationship together, we were already strong in the import business, so it made sense for us to combine our forces so we could have a year-round program. It just made sense for us.”

Blueberries as a category did very well during the pandemic, and Fru-Veg saw the benefits from that. “It’s a very healthy fruit, it’s healthy for your heart and has a good number of vitamins, so consumers were looking for nutritional products during the pandemic, so blueberries sold very well,” Espinosa said. “Blueberries come in a clamshell, which was a big draw, because any fruit that was loose became unpopular during this time.”

Statistically, the category has grown year after year by an average of 5-6 percent, Grimaldi said. Berry Bros. has farms in Florida, Georgia, North Carolina, New Jersey and Michigan. 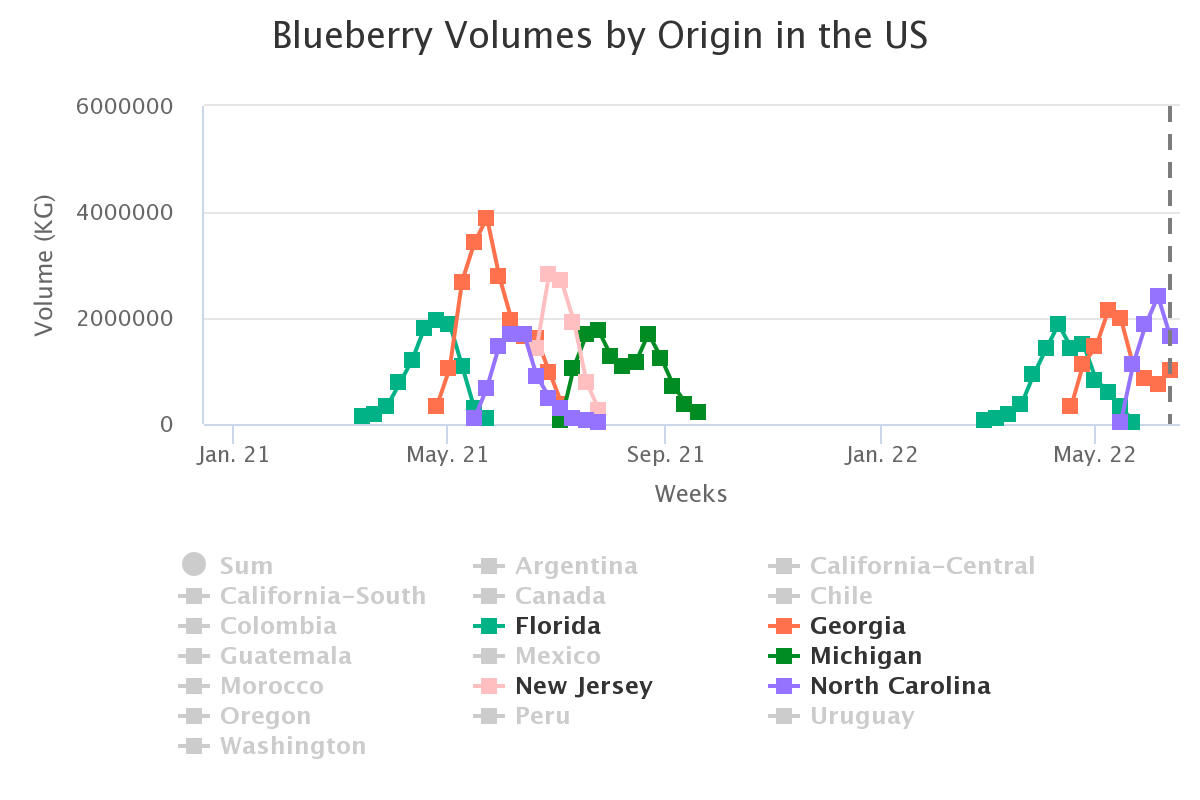 “The Florida season started out great, though there was a lot of pressure from Mexico, which kept the price down,” said John Conner, CEO of Berry Bros. “Georgia had good volume. The freeze we had in late March causes a significant 50-60 percent loss in some of the areas. The market today is feeling it. There is supply out there from different areas but it’s short.”

So, even with North Carolina blueberries coming online soon, Conner expects the blueberry market to stay tight. Some of the fruit being picked now in North Carolina are showing some frost damage, though the fruit eats well. But because it has the dark brown blemish, some retailers don’t want them.

“I don’t see any relief until we get to New Jersey,” Conner said. “Once New Jersey gets in, it looks like good volume, and we’ll be able to support the East Coast well from there.”

The partnership between Fru-Veg and Berry Bros. allows both to service their customers better and fill gaps where other companies might not be able to. “Because we control our own fruit, it gives us the ability to cover the customers that we have; we just don’t have a lot of volume to support those outside our customer base,” Conner said.

With Michigan coming right after New Jersey, there should be no shortage of domestic blueberries all the way through September. Another key aspect of this partnership is innovation, and the companies are always working on testing new berry varieties and packaging, so before customers even ask, they can present them with the newest and best tasting varieties.

“Having this partnership, we’ve already seen many new customers come on board and we’re seeing a lot of growth in the blueberry deal,” Espinosa said. “Our goal in the future is to have the whole berry category year-round.”