Overview of the Mexico’s citrus exports, complemented by charts from Agronometrics. Original published on September 06, 2021.

Between January and July this year, exports The percentage of citrus fruits and their derivatives increased by 28.3% It has a total value of $912.3 million, above $711 million in the same period in 2020, the Ministry of Agriculture and Rural Development reported this Saturday.In addition, the agency explained that, based on data from the Food and Fisheries Information Service (SIAP), the main destination for foreign sales of Mexican citrus fruits – oranges, tangerines, grapefruit and lemons, primarily – is the United States, followed by the Netherlands, Japan, Germany and the United Kingdom.
Historical volumes (KG) of Mexican citrus in the US Market. 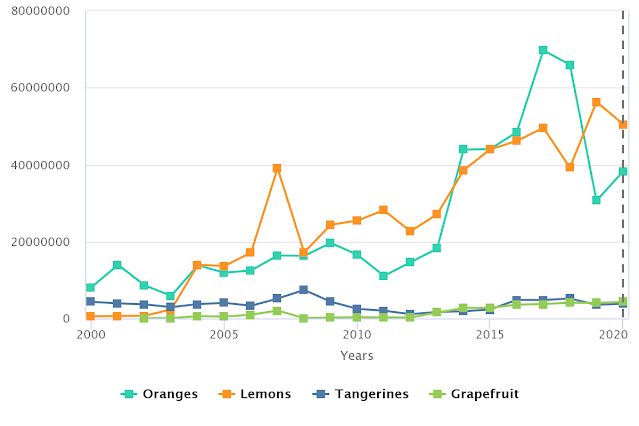 In a statement, Sader noted that the international sale of citrus-derived products “represents an opportunity to attract more foreign exchange.”

The agency pointed out that “citrus fruits are high-consumption fruits in Mexico and are among the most important export products, and have characteristics that distinguish them” as well as in foreign trade, including the following derivatives: juices, essential oils, peels and purees.