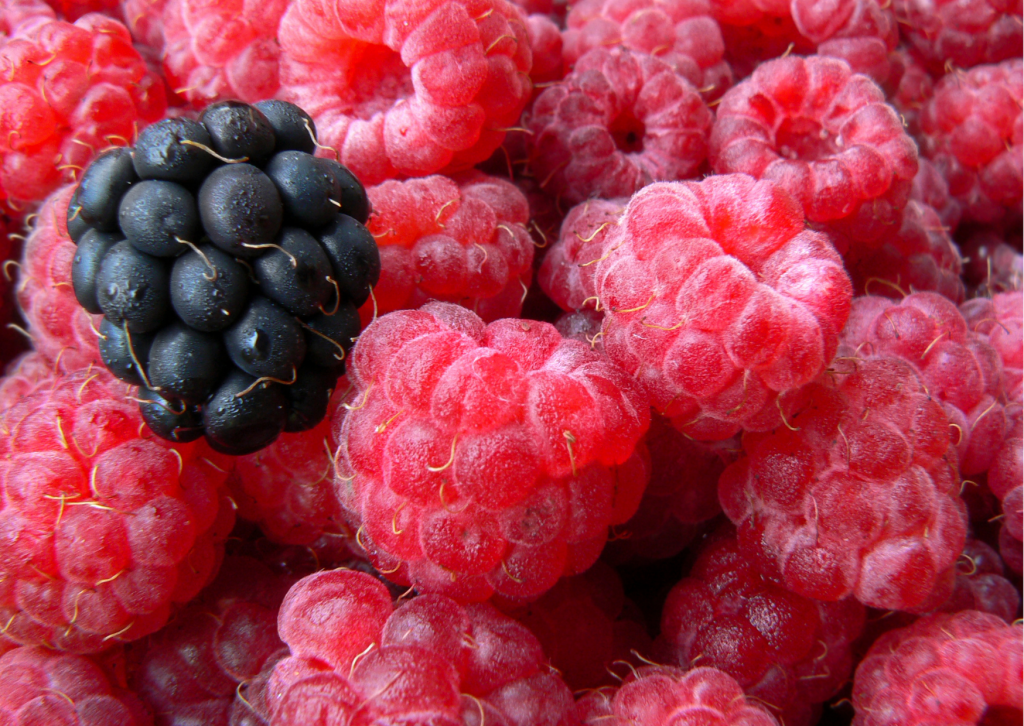 Overview of berries supplies in North America, complemented by charts from Agronometrics. Original published on December 03, 2021.

Volumes of raspberries are strong. One shipper says raspberries are coming from two regions currently: central Mexico, which began in late August-early September and more recently Baja California. “We will have decent volumes by the middle of December,” she says.

She does note that Central Mexico saw steady, persistent rains in the fall. “It definitely took its toll on all of the berries in Mexico unfortunately. It’s made for less volume and a later start in terms of volume as well. But product is available,” says the shipper.

Volumes (in Kg) of raspberries in the US Market 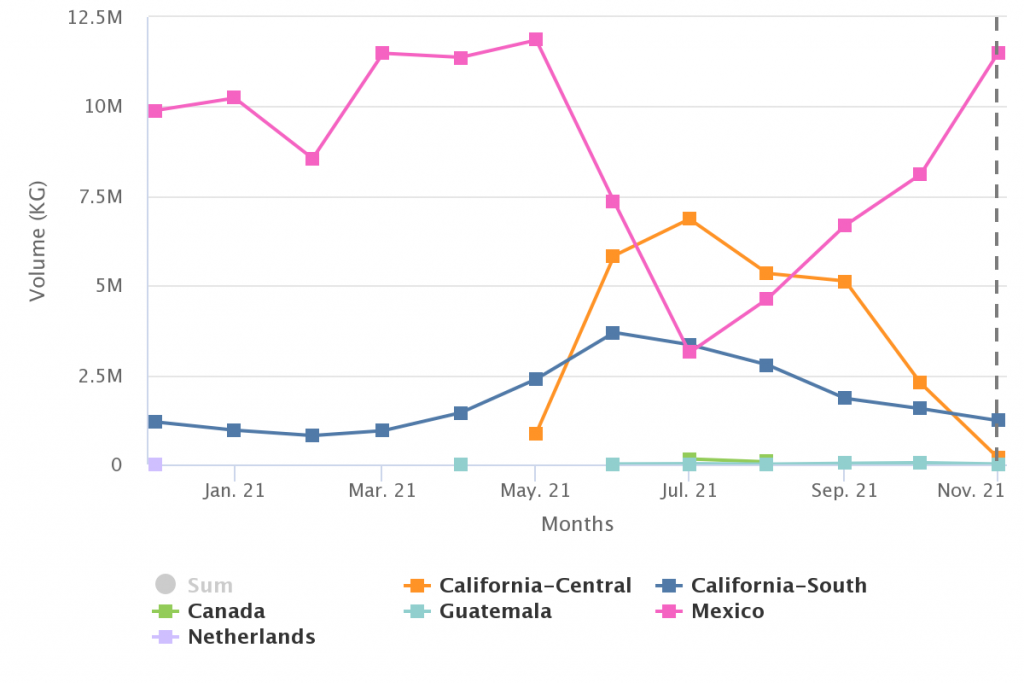 Meanwhile, demand for berries has been excellent, particularly for a new variety the shipper is working with, the Malu raspberry. “It has a very good size and color and even though it has a good size, it is quite firm. It also has an excellent shelf life and it gets very sweet with a touch of acidity. There’s a lot of work in varietal development in raspberries.”

They note that growers in both regions have the Malu, though Baja California growers will have other varieties as well. “With the two regions coming together in the winter months, we’ll have extremely good quantities from the middle of January through the end of February. The Malu itself will also have peak quantities during that time period, in time for Valentine’s Day,” they say.

Overall demand also feels stronger than last year. “It has been a strong fall and raspberries always move well around the holidays, especially for New Year’s. And then January and February are fabulous months–people are eating healthy and berries are such a good fit because they have so many health benefits,” says the shipper.

As for pricing it has been firm and is anticipated to get firmer as Christmas and New Year’s Eve get closer.

Prices (in USD/Kg) of raspberries in the US Market 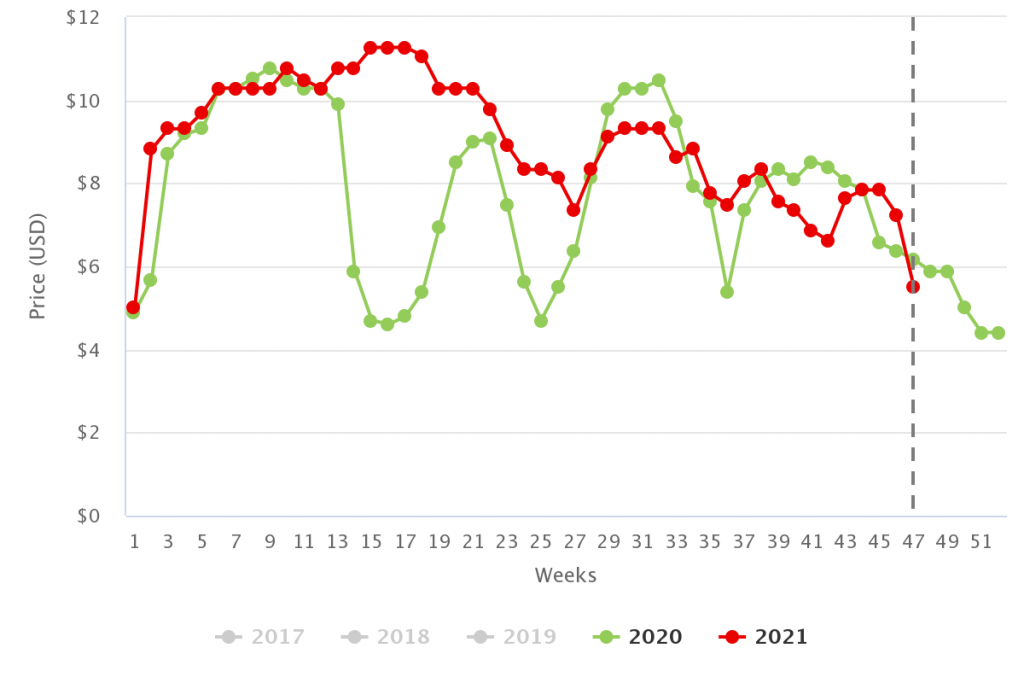 Supplies of blackberries from Mexico are steady but not particularly plentiful.

Volume (in Kg) of blackberries from Mexico in the US Market 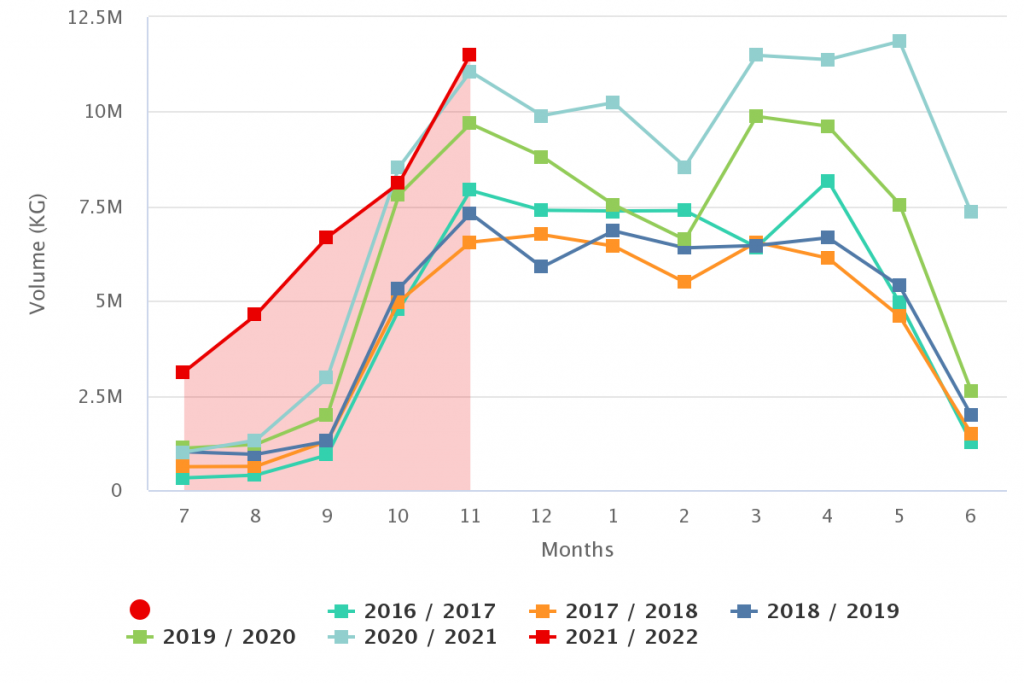 Another shipper says their blackberry supplies are largely the Tupi variety currently and coming from Michoacán. “We’re seeing a more stable season compared to last season. But supply is not as abundant and the quality of Tupi could have some shortcomings. We’re expecting it to be like that the whole season.”

The Tupi is the dominant variety of blackberry that’s been in place for at least 15 years. “It was a great variety in terms of quality many years ago but because of the industry and how it’s treated it, it is now in bad shape,” he says.

Also adding to quality concerns on blackberries is that extended rainy season in Mexico. “Usually the rain finishes by the end of September the beginning of October and it went to the end of October. So it affected not only blackberries but many other berries and crops,” says the shipper.

The start of the season also saw a slight shift. “Last season we had a heavy frost that affected around 800 hectares of berries in Michoacán,” he says, noting that the season started approximately four weeks early this year in early September.

At the same time, the company is working with its newer variety, the Sultana which has begun harvesting already. “Production is limited right now but we expect within four to five weeks to harvest a lot more,” says the shipper. “In an ideal world, we would like to ship Sultana only but it takes time to develop the farms. There’s not enough fruit to fill the shelves right now so it will be a mix,” he says, noting that the variety promises a good shelf life and good eating experience for consumers.

And on pricing, a healthy market is expected given there is less fruit in comparison to previous seasons.

Red currants have limited production in the U.S. If purchased, they are often bought fresh by Europeans in the country, but are otherwise processed into jams and jellies.