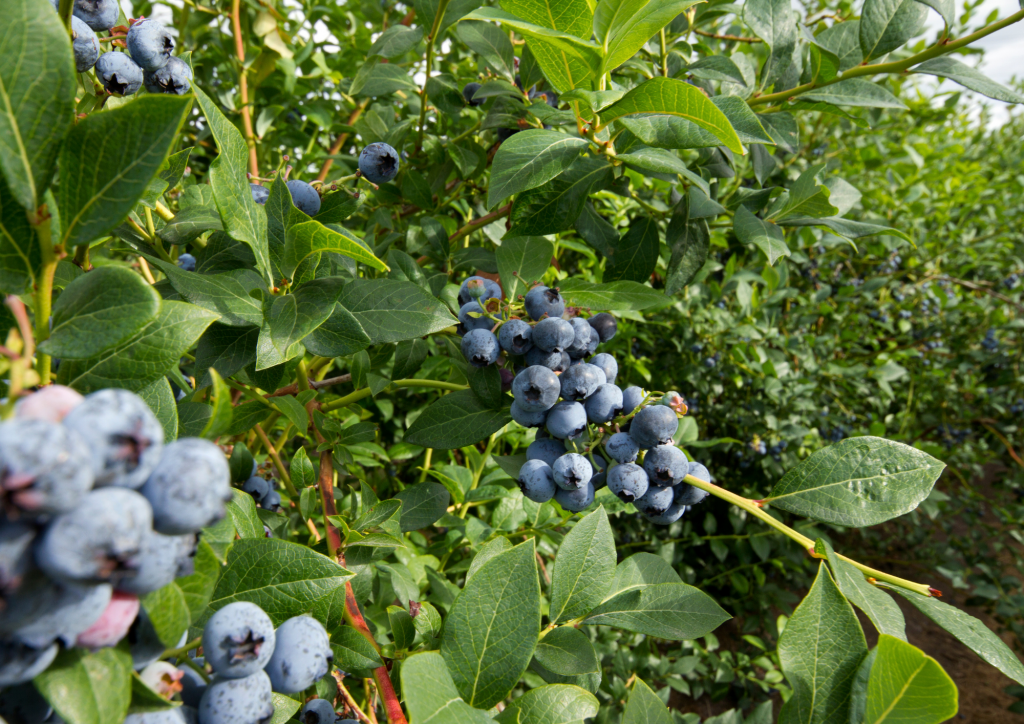 Overview of blueberries from Peru in the U.S. market, complemented by charts from Agronometrics. Original published on August 04, 2022.

More than 10,000 tons of Peruvian blueberries have been exported since the start of the current blueberry season in March, which is in line with Proarándanos‘ projections.

Luis Miguel Vegas, who is the Manager of Proarándanos said: “if maintained in this way, it is estimated to exceed 250,000 tons by the end of the season.” 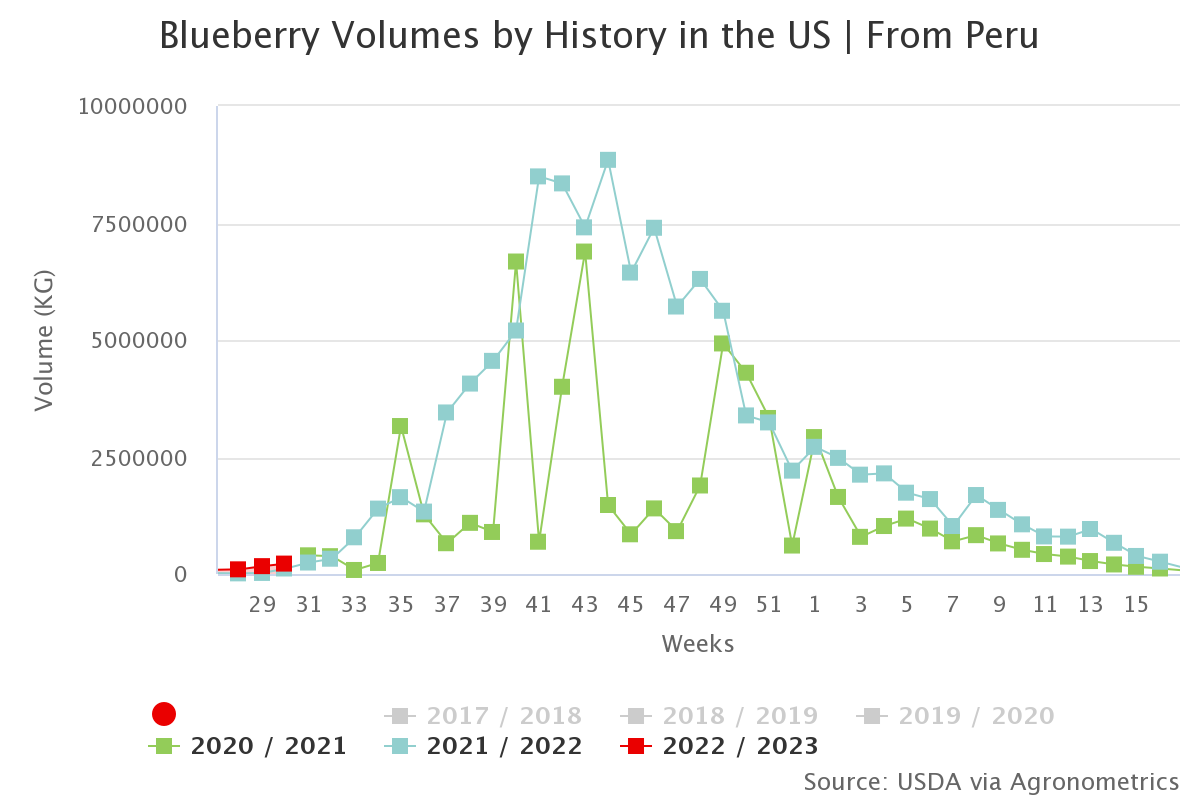 In addition, 92 percent of exports were shipped by sea, while 8 percent were sent by air, and organic crops accounted for 9.2 percent of total exports. 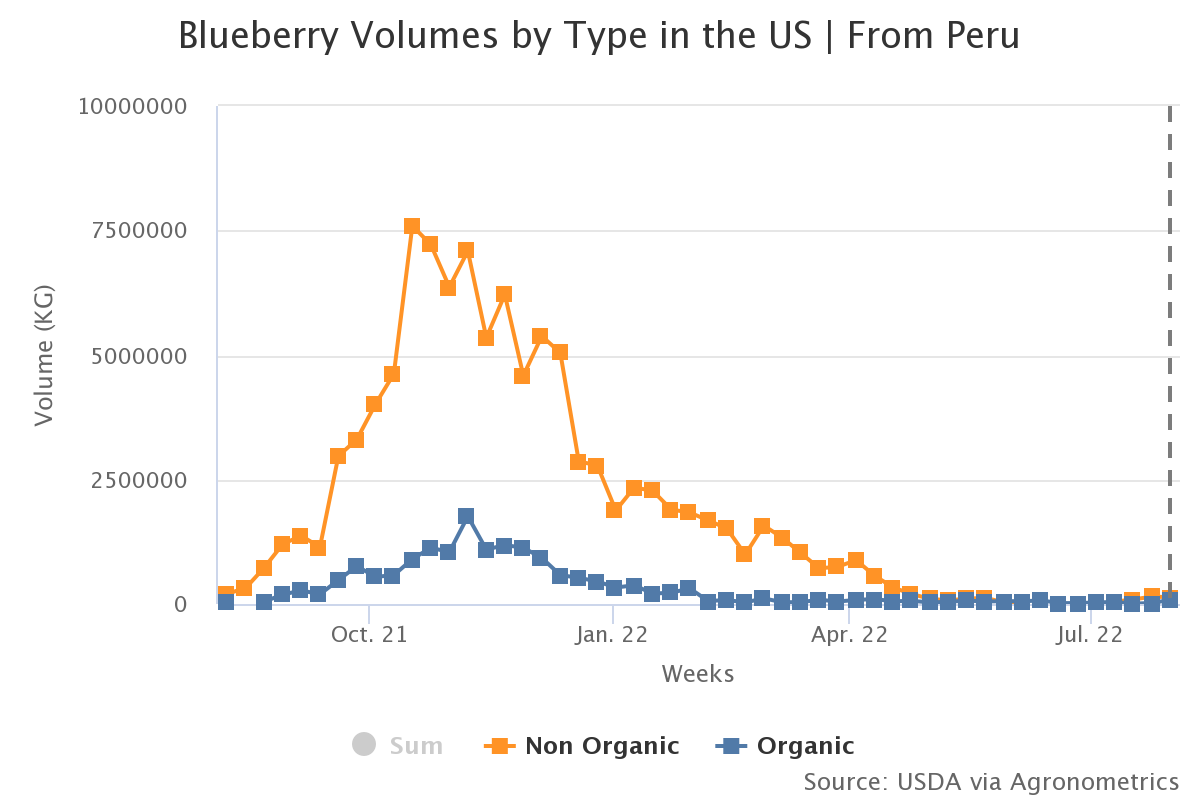 Currently, 18 thousand hectares are used for growing blueberries. La Libertad is the most productive region, contributing the most to exports (57 percent of the volume so far), followed by Lambayeque (26 percent), Ancash (11 percent), Ica (3 percent), Lima (2 percent), Piura (1 percent) and Moquegua (0.3 percent).

Moreover, the blueberry industry creates jobs for local communities. “In the 2021-22 season, it created 120,000 direct jobs in rural areas and is predicted to create more jobs this season. In addition, it is an inclusive sector in which 52 percent of labor is carried out by women aged between 26 and 30”, Vegas pointed out.

The main challenges faced by exporters are to do with logistics and the cost of importing essential agricultural inputs. High ocean freight and import costs (e.g fertilizers) are reducing profit margins. There is also not enough space on ships, so it is difficult to export the fruit in the best conditions.

Another big challenge faced by Peru is increasing demand, meaning it is vital to work on consumer campaigns in different markets. The greater variety of supply should go hand in hand with greater demand, suggested Vegas.

Therefore, gaining access to new markets is key. Promotional, commercial and sanitary efforts made it possible to open Taiwan as a market in 2020. Last year, India and Malaysia gained access and this year, it was Israel.

Other markets such as Indonesia, South Korea, Vietnam, Japan, New Zealand and Ecuador are all currently in the process of being opened.

“We are lucky that blueberries are very healthy and people are more and more aware of how important it is to eat healthily. This fills us with optimism for the future”, Vegas concluded.

It is estimated that 90 percent of blueberries will be exported between August and December, and 50 percent between September and October alone.