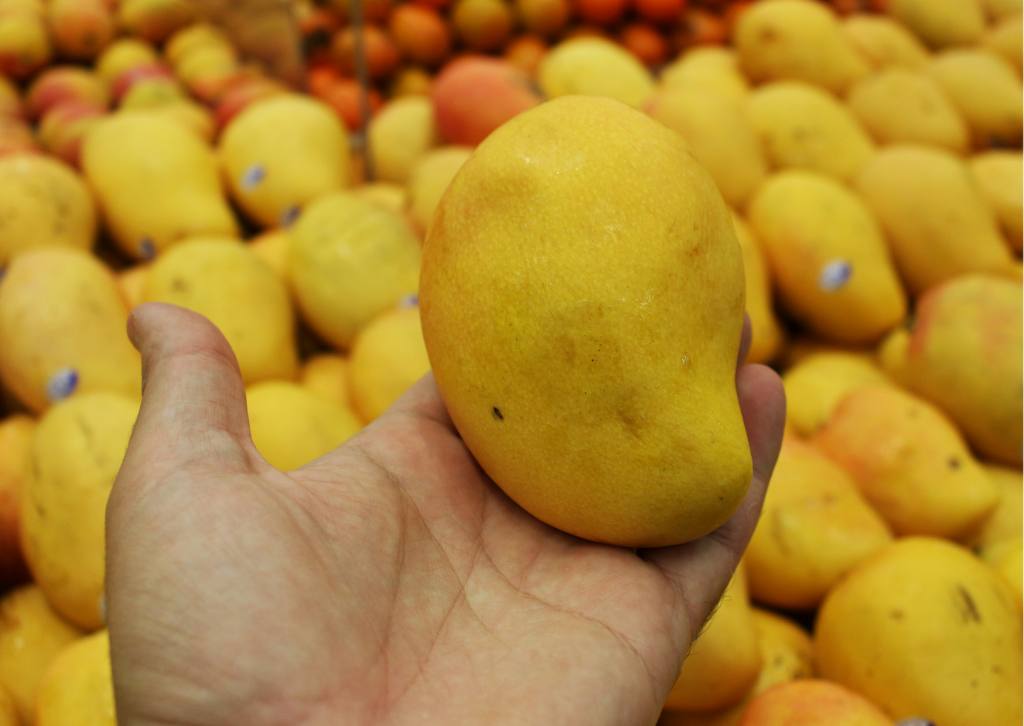 Overview of mangoes from Mexico in the U.S. market, complemented by charts from Agronometrics. Original published on April 12, 2022.

Plenty of good-quality Mexican mangoes should be available this spring and summer, with shipments already outpacing last year.

Importers received 31.7 million 8.8-pound boxes of mangoes from Jan. 20 to March 20 this year, an increase from the 28 million boxes shipped at the same time a year ago, according to USDA. 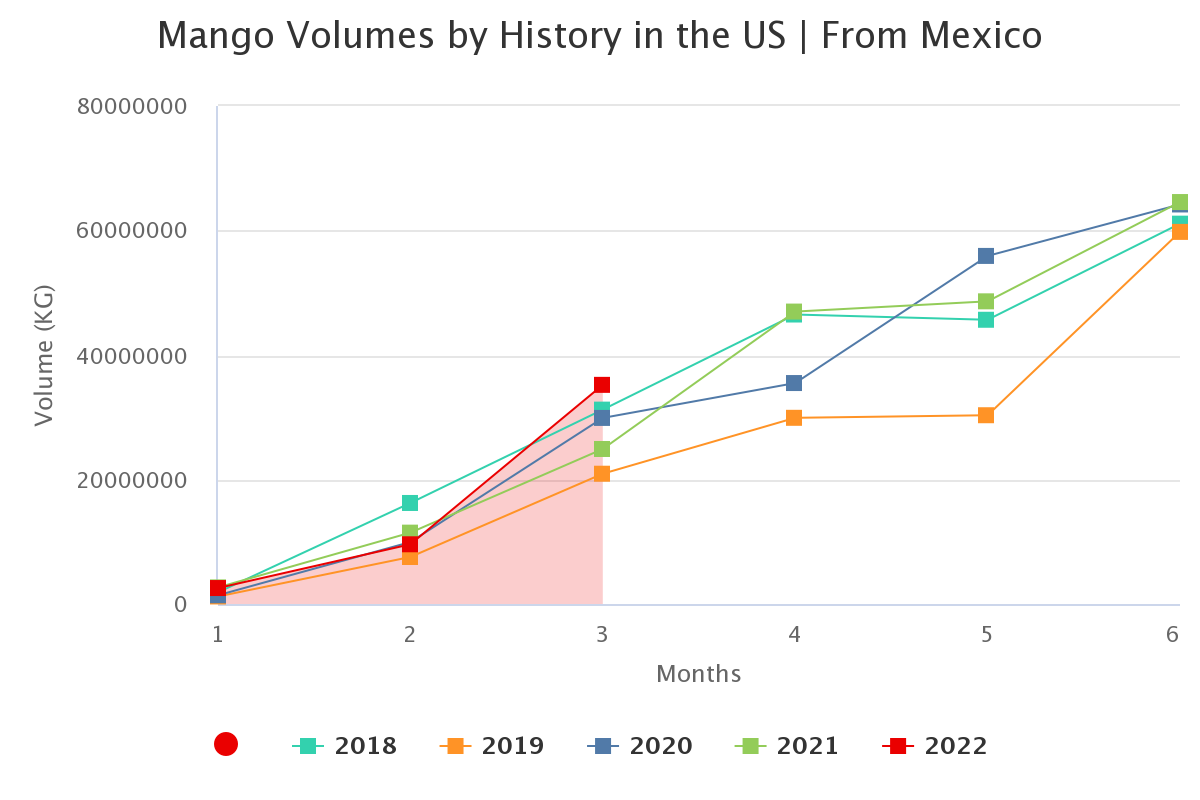 “That keeps people coming back to the stores to keep buying fruit over and over again,” Ciruli said.

By mid-April, Ciruli expected to have a good mix of the company’s Champagne mangoes, along with some round varieties.

Varieties include criollo, ataulfo, keitt, Manilla rosa/carabao, yellow criollo, tommy atkins, irwin, kent and others. Baby green mango, ataulfo and tommy atkins are the most popular. A variety called mango criollo verde could be on the horizon from Sweet Seasons.

Quality is good this season, they said, and volume should be up.

We are getting better products each year,” they said.

April to May is Sweet Seasons’ peak selling time for mangoes.

The company offers all sizes, but most fall in the 12- to 22-count range.

“That’s by far our biggest commodity,” he said.

The company sources mangoes from all the major growing areas, including Mexico, Brazil, Ecuador, Peru and Guatemala.

“We never leave our customers without mangoes,” Matalucci said.

During April, the company imports mangoes from Guatemala, primarily for the East Coast, and from Mexico mostly for the West Coast. 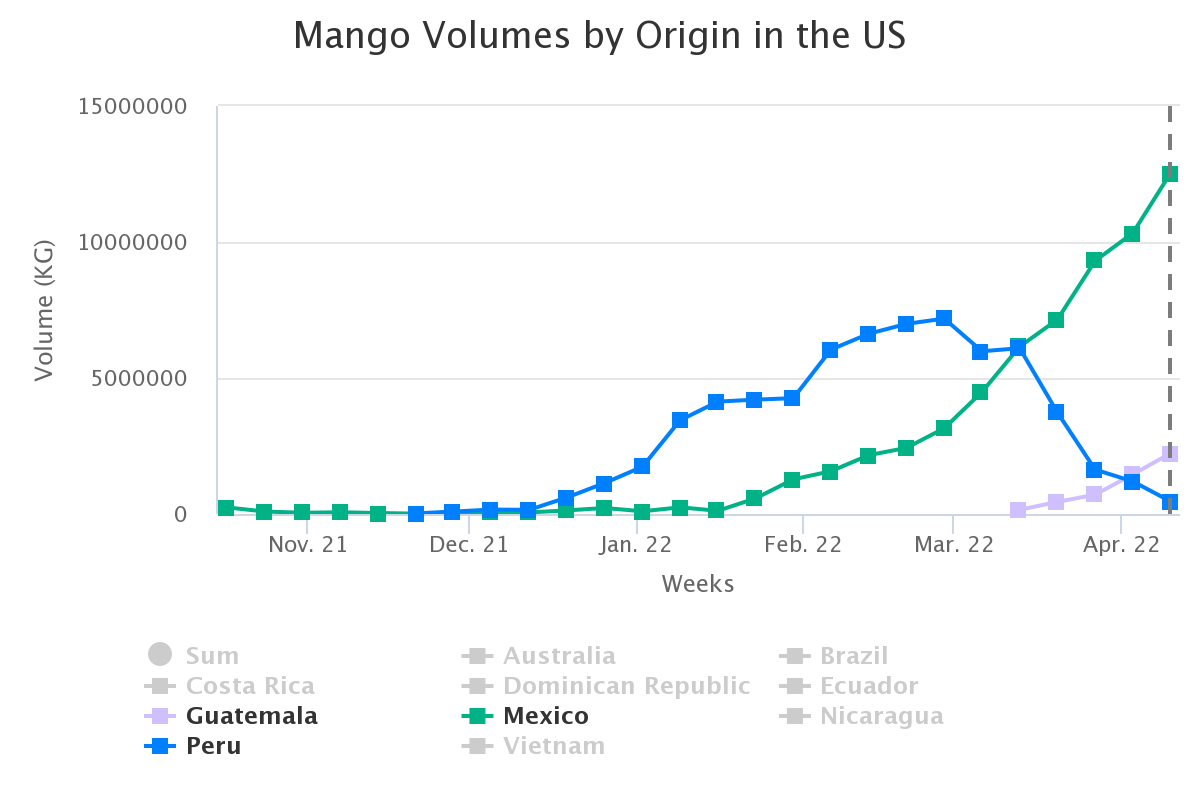 The Guatemala program, which typically is heavy on 10- and 12-count mangoes, runs from mid-March to mid-May and consists of the tommy atkins variety.

“We’re very pleased with our quality so far,” he said in late March. “We hope that quality continues.”

Mexico grows mangoes in six or more regions, he said, and switches growing areas throughout the season.

“Mangoes are definitely a summertime item,” he said. “That’s also when the volume from Mexico is at its peak.”

Consumer packs and pre-ripened product could be emerging trends in the mango category.

Some ethnic stores carry clamshells, Ciruli said. And later in the summer, some larger mainstream stores will stock them, mostly packed with 14- or 16-count fruit.

Ten years ago, only two of Ciruli Bros.’ customers asked for clamshells, he said. Today, that number has risen to 15 customers, ranging from club stores to smaller markets, independent grocery stores and even foodservice accounts.

“A customer of ours actually asked for this configuration back when COVID was at its peak, and it responded so well that we are continuing to pack them this way,” Landin and Garcia said.

Buyers for big box stores often prefer consumer packs and drive much of the business in that category, he said.

Clevenger said there’s not as much pressure to offer ripe mangoes as there is for ripe avocados because, unlike avocados, mangoes can be eaten when they’re still hard.

Ciruli supports offering ripe, yellow fruit at retail. Controlling the temperature of the truck and how it is delivered is the way to go, he said.

Yellow fruit “brings more customers in and brings them back faster,” he added.

Sweet Seasons is looking into offering pre-ripened mangoes next season.

“They are sought after by supermarkets for their customers,” Landin and Garcia said.

Amazon Produce Network does not pre-ripen mangoes, but some retailers pre-ripen their own, Matalucci said.

“It’s definitely something we’re working toward as an industry,” he said.

Merchandising pre-ripened mangoes would result in more sales, but pre-ripening can be a challenge.

“You have to be in a warm room so you can get the entire pallet uniform,” he said.

Mangoes on one pallet often come in different maturities, so it’s difficult to get them all to the same stage.